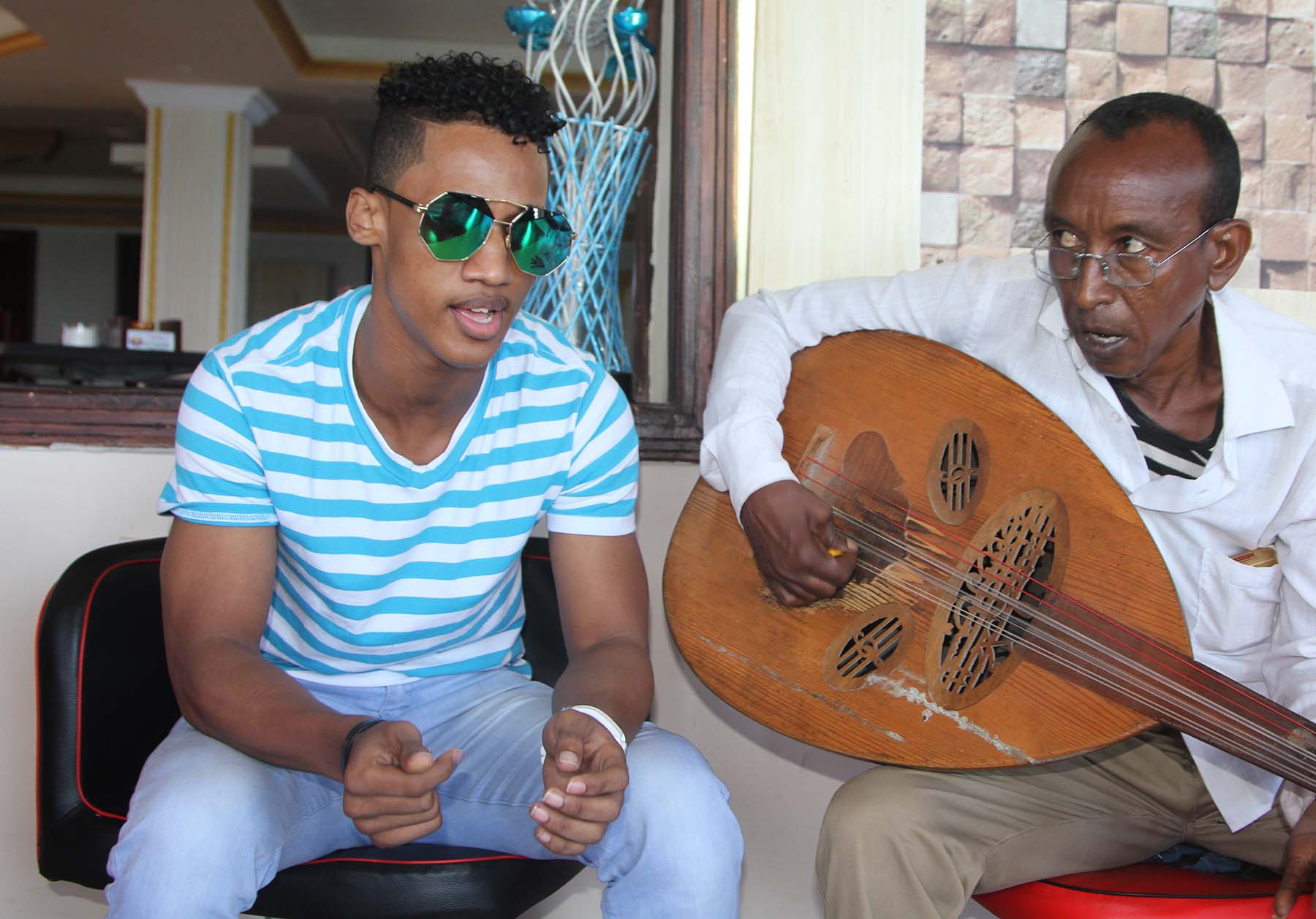 Khadar Keyow sings in a Mogadishu restaurant, accompanied by a man on the oud. He complains of limited stages and training opportunities for aspiring Somali musicians. (VOA)

‘I seek my name to be known’

“I seek my name to be known and [to] become famous,” says Khadar Ibrahim Keyow, whose admirers simply call him Keyow.

The self-trained Mogadishu singer began performing at 13, frequently crooning at parties, weddings and other festivities. He turned 20 on February 13 and, four days later, gave his first foreign show, in Nairobi, Kenya.

Through the internet, he has cultivated a fan base reaching well into parts of the Somali diaspora.

“Keyow plz come here germany man am big fan of yo,” a follower commented on a YouTube video that has garnered roughly half a million views.

In it, the artist sings in a soft tenor and grooves to a propulsive electronic track. His lithe body sways in ripped jeans and a T-shirt, the camera zooming in on his fleeting pout and a crown of short curls.

“Nice one I like it walhi even I am from Eritrea. ... you are also Hero. Kip it up,” wrote another enthusiast.

“Woow, his face and his voice are so amazing,” still another raved.

“My worst fear is that my beloved one could have been either trapped or killed. Her sins had showed up,” he frets in Somali in one video, reprising a tune popularized by native legends Luul Jeylaani and Ahmed Naji.

“The tendencies we have seen from Somalia in recent years are attacks and bans on music, musicians and radio stations delivered by the religious forces / al-Shabab.”

“The tendencies we have seen from Somalia in recent years are attacks and bans on music, musicians and radio stations delivered by the religious forces / al-Shabab,” the group’s manager, Rikke Nagell, told VOA in an email.

Ali Asani, a Kenya-born Harvard professor of Indo-Muslim religion and culture, maintains that the Quran does not explicitly ban music and that Quranic recitation itself is a form of sound art, “a way in which one connects with the spiritual and the divine.”

Debates about Islam and music have gone on for centuries, Asani explains. Historically, Islam’s most conservative strands have held that music is intoxicating, “like alcohol. It takes away reason, it interferes with your rationality.” More recently, some hard-liners “see Western culture and Western music as a form of hedonism ... corrupting youth.”

And they have weapons to enforce their views.

They’ve deterred headliners such as Wayaaha Cusub – a Somali hip-hop collective that formed in Kenya, where their families had fled when they were children – from returning to their Somali homeland. The group’s songs have criticized al-Shabab as well as warlords urging youths to take up arms.

Keyow doesn’t worry “about al-Shabab attacks against me because I do not say anything about al-Shabab,” but he laments the repression. “Even though a lot of people are becoming singers, we don’t have stages to train and be selected, as the old singers did.”

He openly posts on the web and social media – not just music videos but livestream clips of partying with fans or goofing off in airport, avocado drink in hand. He shares his music, seeking out people with lots of followers. “I Snap[Chat] and put out my new songs on Facebook.”

In Keyow’s pursuit of stardom, he explains, “It’s a must to be connected.”